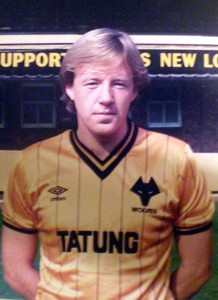 Ainscow started his career with Blackpool and before making his League debut he had helped the Seasiders to success in the Anglo-Italian Cup. Blackpool won in Bologna as Ainscow ran himself ragged. A month later Ainscow then made his League debut and netted in a victory over Swindon Town. In June 1972 he picked up a runners-up medal in the same competition, and in December 1972 he netted a famous hat-trick at arch rivals Preston North End. But after making 229 appearances at Bloomfield Road, Blackpool were relegated to the Third Division for the first time in their history and Alan was on his way to Birmingham City in July 1978. His first season at St. Andrews saw them relegated to the Second Division and his second saw them immediately return to the top flight. He then had spells at Everton August 1981 and Barnsley on loan November 1982, as well as a stint in the Far East with Eastern Football Club before returning to the English game with Wolves under the new manager of Tommy Docherty in August 1984.

Wolves were going through troubled times and relegation was suffered despite Ainscow’s best efforts as Captain and being equal top scorer. In December 1984 with Wolves again struggling in the Third Division, Ainscow moved back to his native Lancashire with Blackburn Rovers where he stayed three and a half seasons.

He made nearly 80 appearances with the Ewood Road club and helped them lift the Full-Members Cup in 1987 before spending his final season of professional football with Rochdale from July 1989. By the time of his final game at Maidstone United in April 1990, He then dropped into Non-league football and had spell with Horwich R.M.I., Flint Town United, Ellesmere Town and Atherton Collieries.